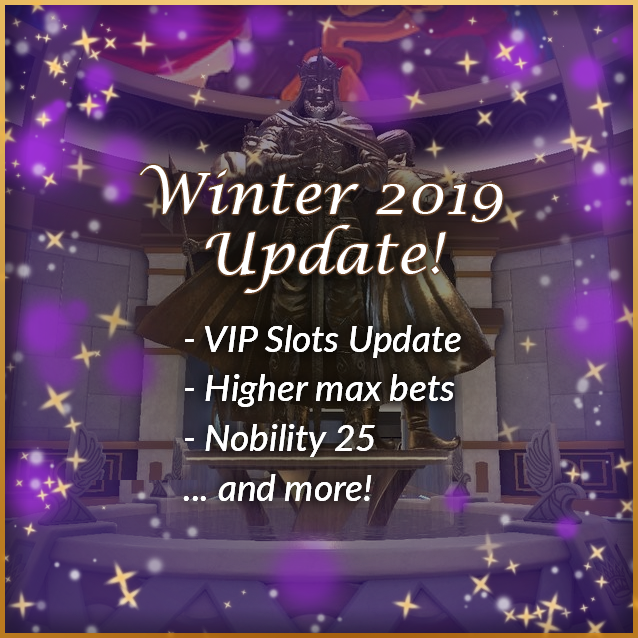 VIP and High Rollers Slots Get a Big Upgrade

After many requests from players, now VIP and High Roller members can get even bigger benefits on slots! VIP slot machines can now go up to double the usual max bet, and High Roller slots can go up to four times the normal max bet!

Slots in general have received a speed boost, and spins will take less time to complete.

Keno auto-play now plays up to 50 times instead of 10, to keep it in line with the auto-play on slot machines.

Been kicked out of the game twice already n shown
Error (CE-34878-0)
When playing get a about a second of sound like music etc on loading screen.
Second time i logged in b4 getting kicked off i wasnt getting map or screen to choose waldrobe settings etc.

No trees were destroyed in the sending of this message, however, a significant number of electrons were terribly inconvenienced.

Video Blackjack only confirms tones every second hand now, which I don't like now as it's confusing to know which hand is in play anymore if doing quick play.

Err, the social screen is transparent???
Also settings page, then got ce348780 error...

We are aware of some issues that have crept in to the live environment and are working towards a quick fix. Apologies for the troubles.

I believe it's the Miniature Sleigh companion if I'm not mistaken.

So, no rp balancing? Very disappointing.

Every time there is an update it scares me. Fix an error and add news and worse errors. The screen freeze error returned whent you go to the menus. Follow the error 1004. To enter machine it takes. The menus are out of control. Everything is wrong in the casino. I go in i can take 10 minutes to play, error 1004 persists

No trees were destroyed in the sending of this message, however, a significant number of electrons were terribly inconvenienced.

From: The Netherlands
Comments: 7

Congratulations yall broke the game with this update xD
Over 30 application errors already. No joke. Everytime I teleport to the lobby the application crashes.
Error number CE-34878-0
I expect some sort of refund for this (For everybody)
Lost over 30 hidden chips and wasted a lot of time by having to restart the game over 30 times (in 1 day lol)

Have you seen what the update did to avatar’s pics in the social menu? Looks like they were all taken at midnight with no lighting

Have you seen what the update did to avatar’s pics in the social menu? Looks like they were all taken at midnight with no lighting

We're aware of this issue as well and working on it.